Some of the dining room walls are painted purple to showcase the paintings Brian creates. The full length mirrors are from IKEA and the dining set is from West Elm. 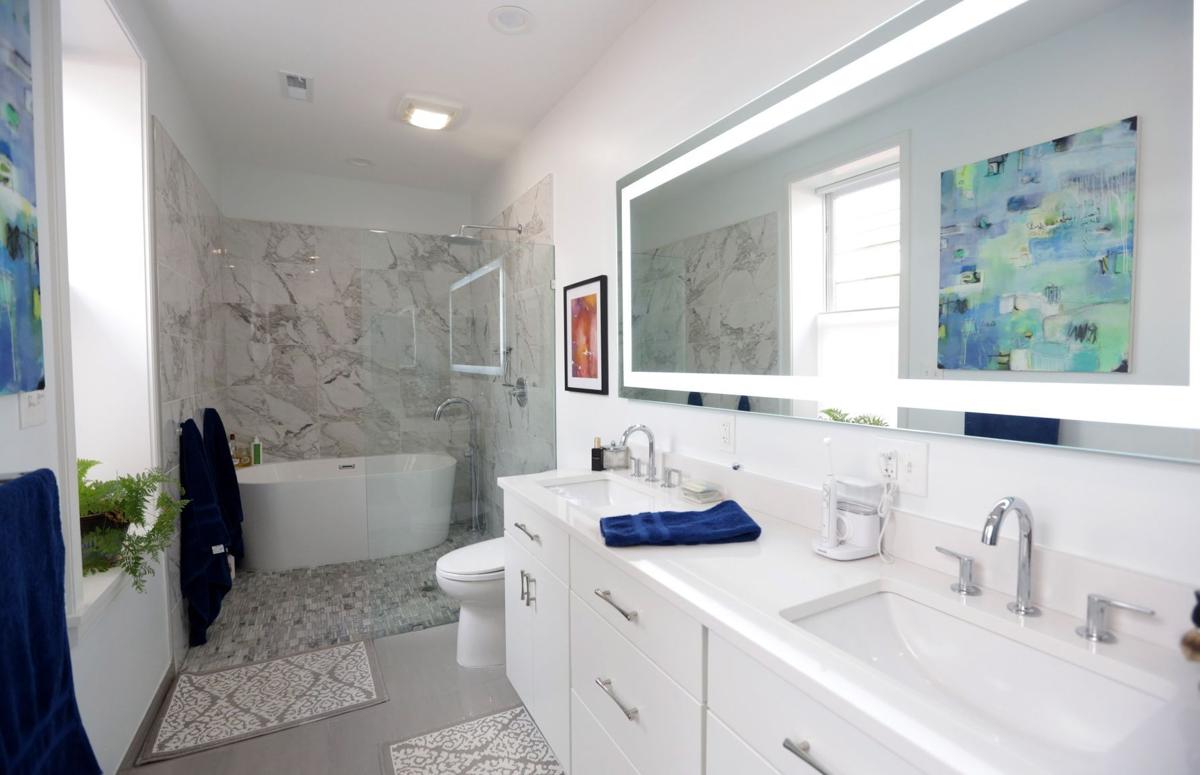 The main bathroom was originally divided into smaller spaces. The Kirchoffs renovated it into a large space, designed by Brian. Gray porcelain tile floors are complemented by clean white cabinetry. The wet area features an oversized freestanding tub and an open shower with marble flooring. 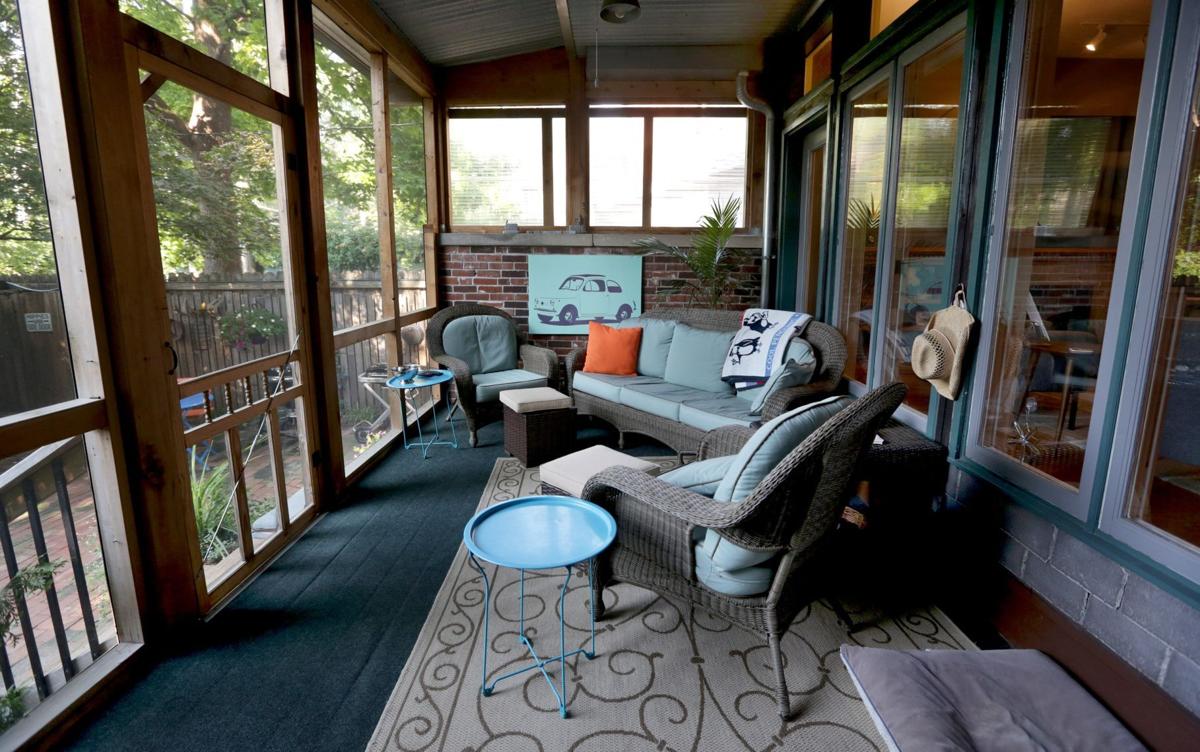 The screened porch off the living room and overlooking the courtyard is a favorite place to relax. The porch was there when the Kirchoffs moved in, but they enlarged it to make it larger and hid it. Brian had had plastic made to fit the screens so they could use it all year round. 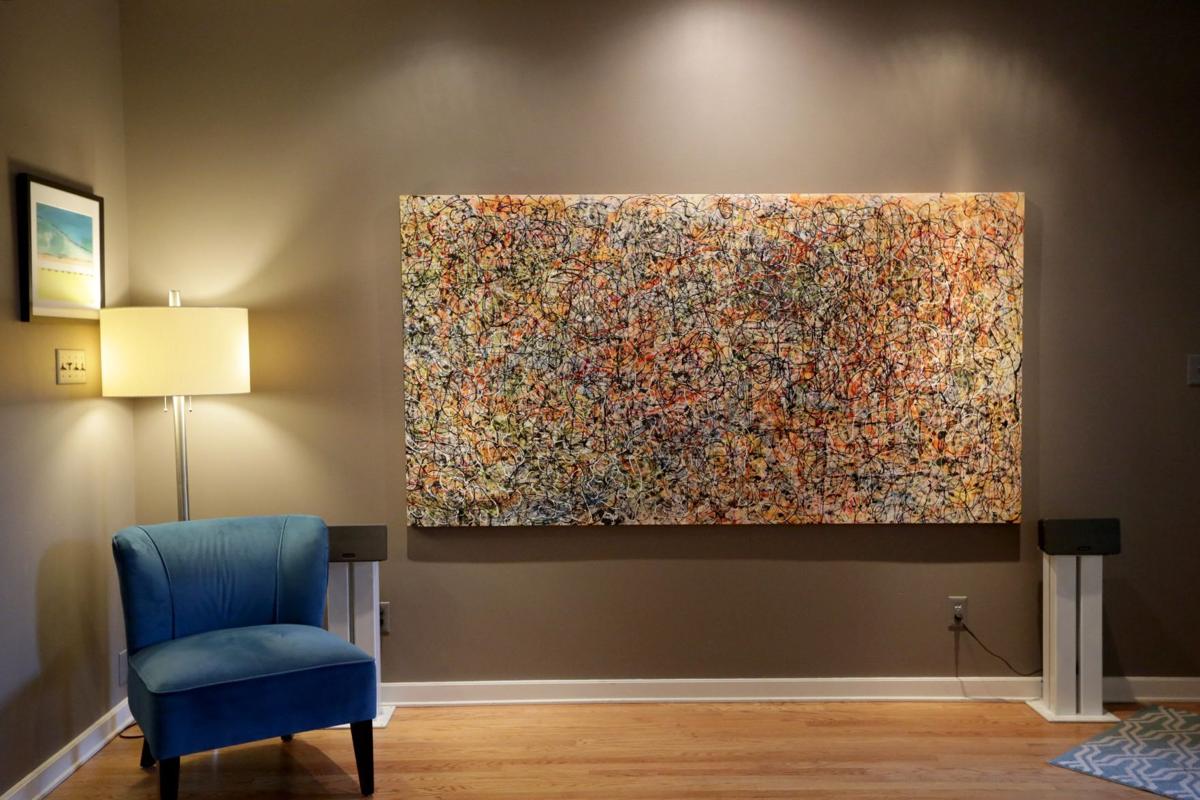 A large painting of Brian occupies one wall of the living room. Recessed lighting illuminates it from above. Brian’s art lights up the walls of almost any room. The finished basement serves as an art and recording studio for Brian, who is also a voice over artist. 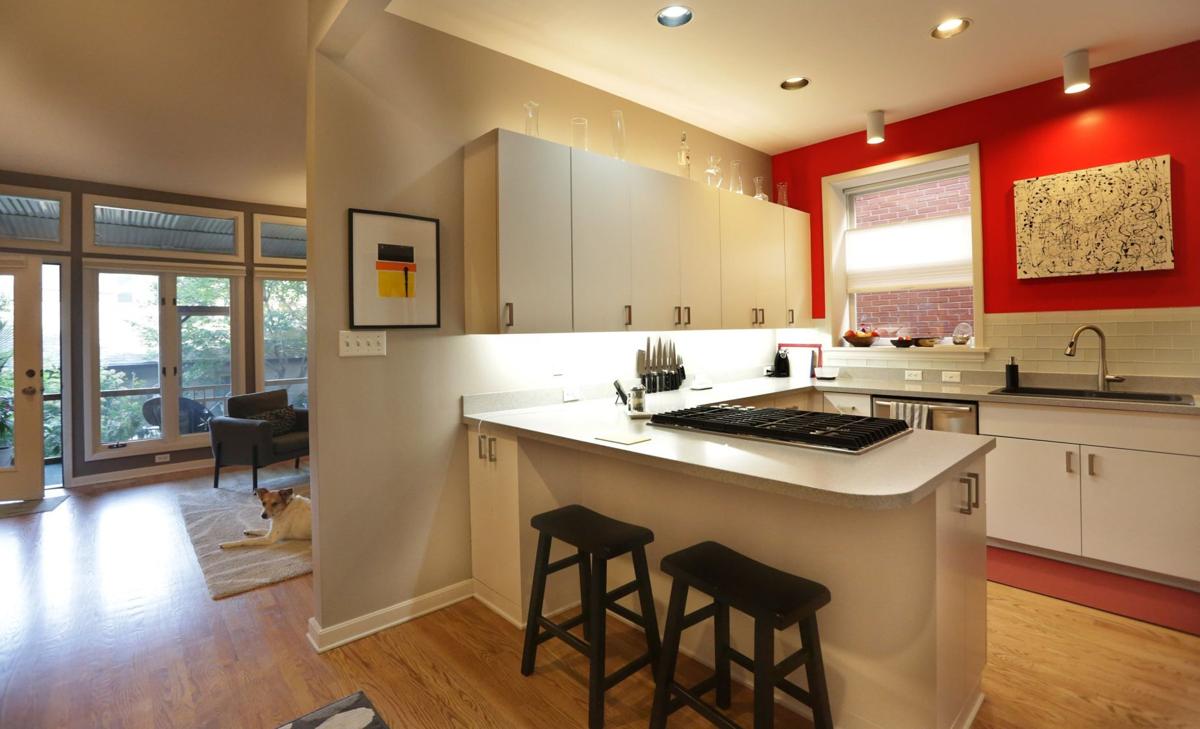 The modern kitchen is open to the hallway and the living room. The Kirchoffs updated it with new cabinet fronts and hardware from RF Home in Kirkwood. as well as new Corian counters and appliances. A bright red accent wall offers a pop of color and boxed recessed lighting brightens up the space. 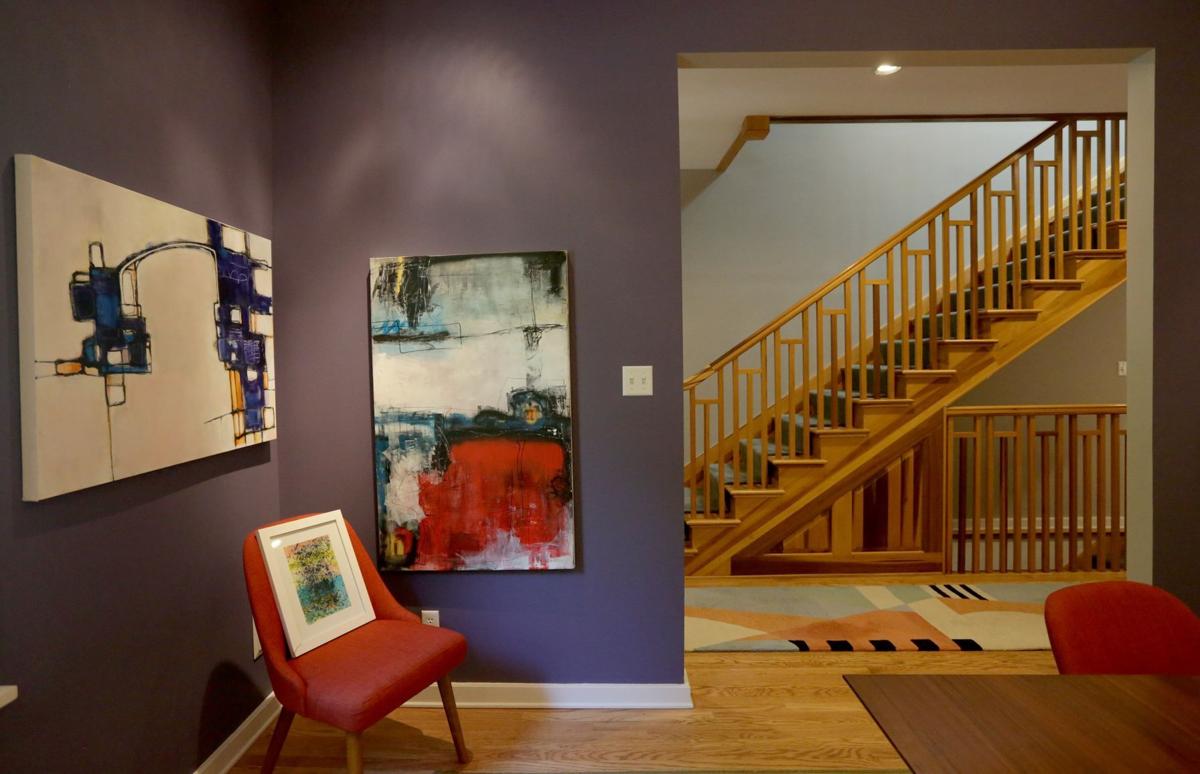 Other works of art by Brian are on display in the dining room. In the hallway, a beautiful mission style walnut wood staircase leads upstairs to the bedrooms and the finished basement. 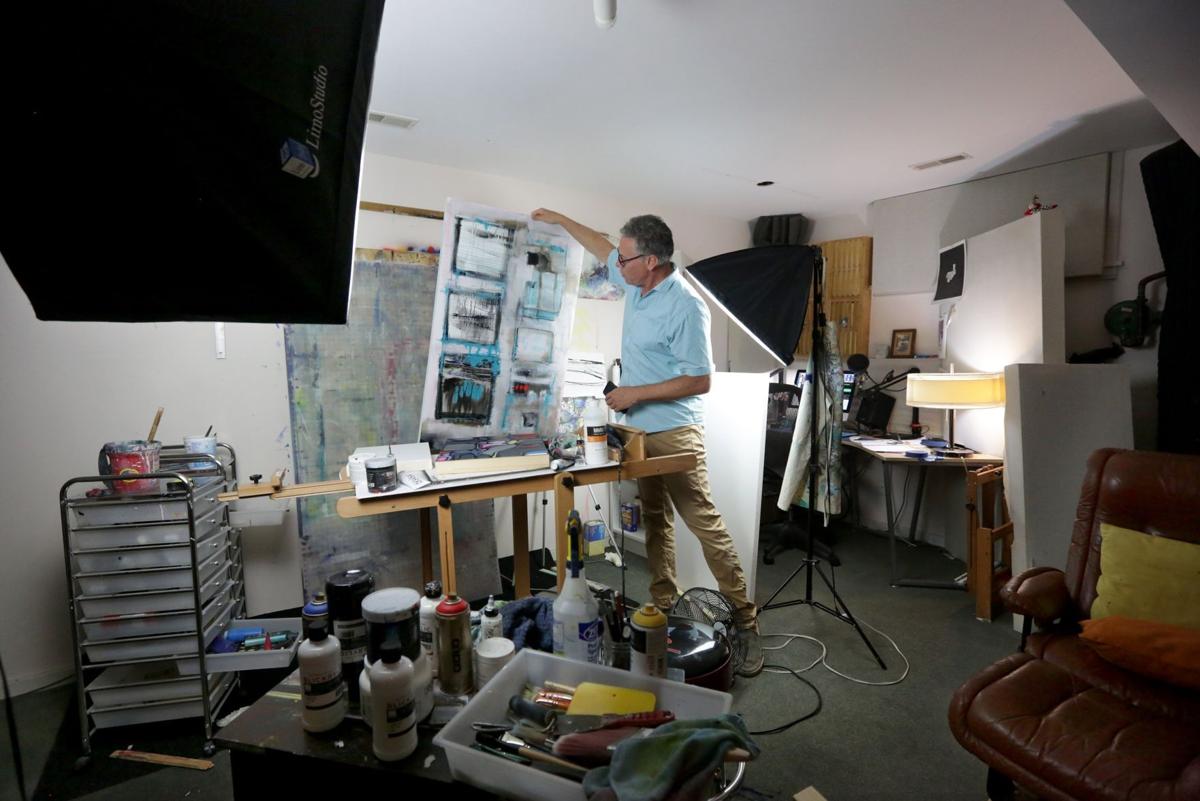 Brian Kirchoff stands in his basement studio, which has a space for painting as well as a recording corner for his voiceover work. 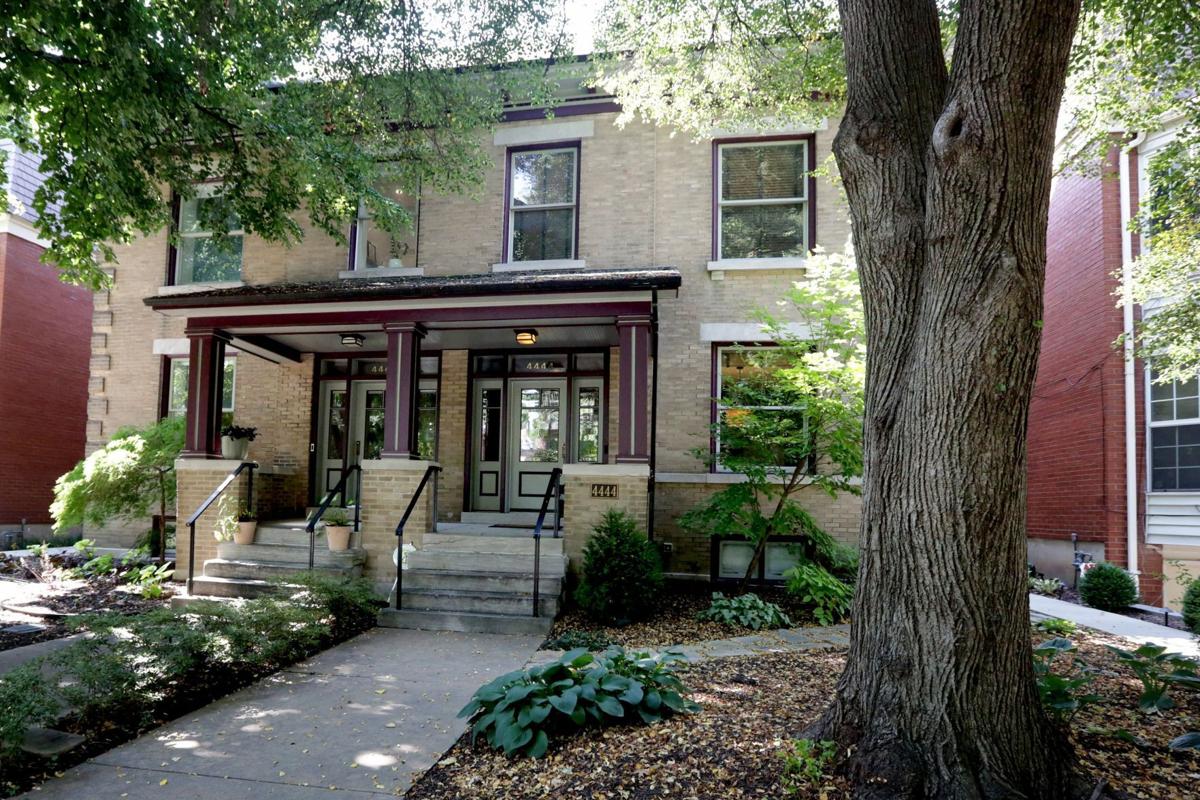 The building, now two-family, was originally built in 1904. When the Kirchoffs moved in six years ago, they worked with their neighbors to modernize the front faÃ§ade. 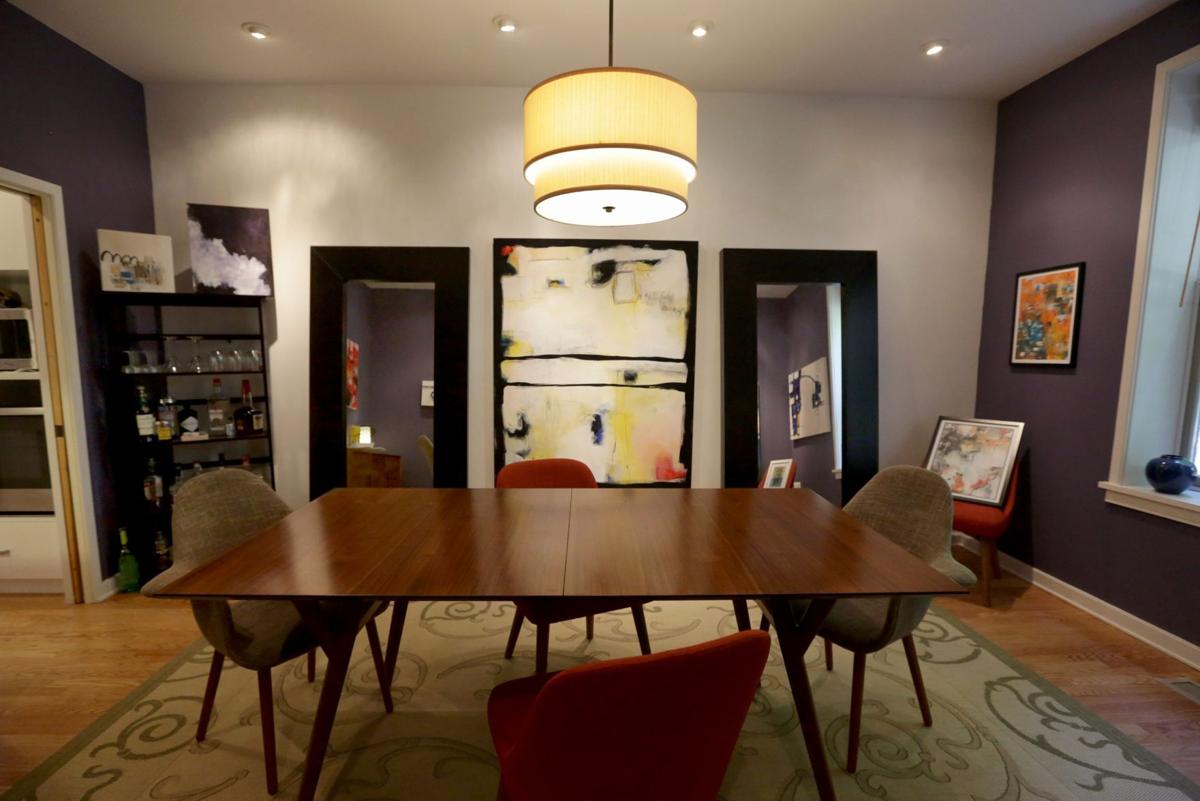 In the dining room, a large painting by Brian is flanked by full-length framed mirrors from IKEA. The dining set is from West Elm.

By Amy Burger Special at Post-Dispatch

Longtime radio veteran and voiceover artist Brian Kirchoff started painting just three years ago, but in no time he honed his skills and amassed a vast collection of artwork. abstract. He has exhibited and sold his work at various art exhibitions and on his website, and works in a basement studio in the Central West End condo he shares with his wife, Betsy. Brian’s art also adorns the walls of almost every room in their home.

Built in 1904, the historic building was gutted and renovated in 1989. The Kirchoffs believe it was once a four-family house, but was converted into a two-family house during this renovation with row houses side by side. The Kirchoffs bought their unit six years ago, moving into the 1,100-square-foot-per-floor condo of their former 3,500-square-foot home in nearby college town as their daughter left for college out of the city. State.

â€œI tend to want to move every 10 years,â€ says Brian. â€œWe’ve always loved the Central West End. Every now and then I would just look to see what was available.

When the Kirchoffs saw the remodeled condo, they knew it was perfect for them, with two floors of living space plus the finished basement for Brian’s art and recording studio. They were also delighted that there was a detached garage and a small fenced yard, both of which are hard to find in a city condo.

The house has been nicely renovated with lovely touches including beautiful walnut doors, stairs and woodwork, as well as fitted wardrobes and a marble fronted wood burning fireplace in the living room. When they moved in, they worked with their neighbors to remodel the building’s front facade and replace its membrane roof. They also enlarged and concealed the living room porch, as well as a terrace on the second floor of the master suite and added a full width retractable awning.