A black man replaces Napoleon, for example, in Wiley’s version of Jean-Auguste Ingres’ 1806 portrait of the emperor seated on his throne. Wiley’s model sits on Napoleon’s magnificent ermine cape, but the red velvet robes and laurel wreath have been replaced with casual daywear and a flippant black cap.

To 21st-century eyes, Ingres’ portrayal seems ridiculously pompous — an ostentatious play meant to make a short man look tall — so the theatrics of Wiley’s version are perfectly on point. The main difference, of course, is that Napoleon wielded real power, whereas the posture of Wiley’s model is imaginary, unless you take into account that with his toned body, the black man is physically well. superior. to the white weed man. One type of power is measured against another.

Wiley’s paintings are therefore never simple reversals of tradition. It’s also not entirely clear what he’s trying to do. His models are beautiful and he gives them a lot of dignity and pride. Black’s insertion into the canon is a reminder of their former absence, but it does little to improve their exclusion or change the balance of power it reflects.

Then there is the conscious artifice of the project. Take, for example, Caspar David Friedrich’s version of Wiley Chalk cliffs in Rügen,1818 (right picture), one of the paintings that inspired the National Gallery exhibition. Impeccable drawing allows him to perfectly copy Friedrich’s landscape. In the original, three people (the artist, his wife and his brother) gaze at the edge of the cliff in awe. They are tiny compared to a landscape whose magnificence is an invitation to contemplate God’s creation and our place within it.

Wiley replaces them with two much taller figures who stand in the center of the picture, ignore the view and play pat-a-cake. They seem superimposed, like cutouts separated from their surroundings; one of them is even staring at us, as if daring us to kick him out. Then there is color; Elevating the original’s subtle hues to kitsch, Wiley transforms Freidrich’s spirituality into sublime icing sugar devoid of any hint of romance. Perhaps he wants to highlight our loss of connection with nature, but the jarring disjunction always makes the image look bad and undermines its credibility.

So far the artist has focused primarily on painting, but here the images function as an introduction to the main event – ​​a six-screen projection of his film. Prelude (main picture), also inspired by Romantic painters and writers, such as William Wordsworth and Ralph Waldo Emerson.

Wiley took a group of black Londoners from Soho to Norway and filmed them in the snowy void of mountains, lakes and forests. They look dramatically out of place in the inhospitable whiteness – a compelling metaphor for life as a black person in a predominantly white controlled world.

Colorful clothing – yellow, orange and red anoraks – further sets them apart from their monochromatic surroundings. They are not dressed for the cold but seem determined to oppose it. Some weave their way cautiously through deep snow in flimsy boots; two women, their hair braided in a huge top-not, brave the violent winds and two guys expose their naked torsos to the weather. The footage is very beautiful. Firelight makes everything red (picture below) and, to accentuate the contrast between comfort and cold, a shot of the spark-laden air cuts to blizzard conditions. 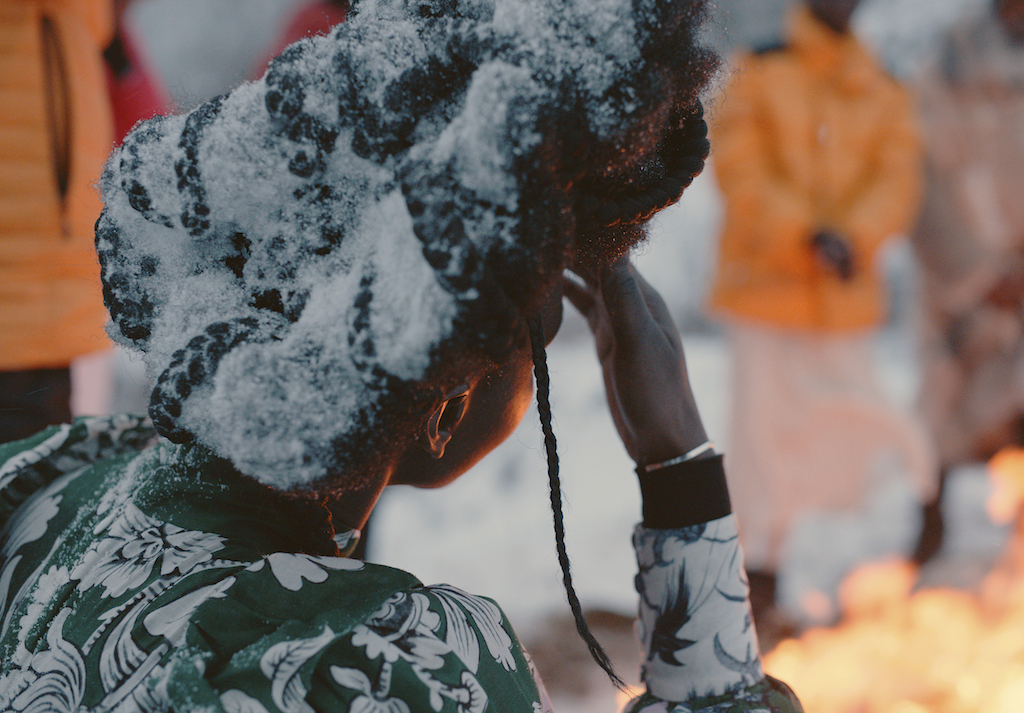 A young man quotes Emerson: “We are as much strangers in nature as we are strangers to God. We don’t understand the notes of the birds… We don’t know the uses of more than a few plants, like corn and apple, potato and vine…”

In the most compelling sequence, five individuals smile at the camera; snowflakes clinging to their hair, eyebrows and eyelashes, they hold on for long minutes as the camera pans out for a close-up, then pulls back to return to reveal tense muscles from the pressure of a fixed smile. It’s like torture. Is this what true resilience looks like – being able to keep smiling in adverse circumstances?