FAR in the distant landscape of the World Crucifixion (1502-03), beyond the Calvary frequented by Saint Jerome and Saint Mary Magdalene, we see a meandering river and a hilltop town. It is in the first room, next to what could be a self-portrait of the artist at 15 (British Museum) and an oil painting of a teenager Saint Sebastian.

It resembles the Tiber Valley below Città di Castello, which Raphael (1483-1520), aged 17, traveled to from his home in Urbino. His father, Giovanni Santi, was an established painter in the ducal house there, with whom he trained. Mond’s Crucifixion was painted for the family chapel of a local wool merchant, Domenico Gavari, in his eponymous church.

Raphael was already a prodigious expert in his own right; he signed his first contract with another wool merchant from Città in December 1500 as “master” of the guild for an altarpiece in the chapel of St. Nicholas of Tolentino in Sant’Agostino.

On Raphael’s birthday this year, one day when I found myself unexpectedly stranded in Pisa, I was able to see one of his predella panels in the Palazzo Reale. Lille sent studies for the central altarpiece showing Raphaël’s care and attention to detail.

These altarpieces amply justify the assertion made later by the biographer Giorgio Vasari. He commented that, if the young Raphael had not signed Mond’s painting so visibly (in gold letters, on the cross), many would have thought it to be the work of the more mature artist Pietro Perugino (1446-1523), from Perugia.

When Raphael settled there, perhaps invited by the older painter Pintoricchio (1454-1513), for whom he provided designs for a commission he had received for the Piccolomini chapel in Siena, his matured style reflected that of Perugino.

In 1504 he received a letter of introduction from a patroness in his native Urbino, sending him immediately to work in Florence with the artist Soderini. There, in the city of Michelangelo and Leonardo, he became known for making small-scale Madonnas, beautifully displayed here in the fourth room.

He was in contact with the prosperous Florentine merchant Taddeo Taddei, who owned the Michelangelo tondo (Royal Academy, London) which clearly influenced his manipulation of the Christ Child in the Bridgewater Madonna (1507). The infant is cradled almost horizontally (National Gallery of Scotland). Even in Michelangelo’s incomplete sculpture, this compositional device is a tour de force.

Perhaps the most moving of the Florentine Madonnas is that which once belonged to the Tempi family (Munich, Alte Pinakothek). Here, Raphael brings the Virgin and Child into an intimate and compelling embrace of benevolence that recalls the sculptures of Donatello and goes back to the Byzantine icons of the Glykophiles.

Raphael left Florence in a hurry, moving to the papal city of Rome to work at the Vatican Palace and for the Pope’s banker, Agostino Chigi. Was the move occasioned by his failure to secure more public commissions in Florence or at the direct invitation of the Ligurian Pope, Julius II della Rovere? Or was he kicked out of town for borrowing too many drawings from other painters?

Raphael was not always the plaster saint portrayed by Vasari. His untimely death in Rome, aged just 37, on Good Friday 1520 may have been the direct result of a tumultuous life. This ended his 20-year career, but not his influence.

Professors Ekserdjian and Henry were able to put together a condensed exhibition. Originally slated for the anniversary year (Arts, April 17, 2020), it escaped largely unscathed, although the large double portrait of Andrea Navagero and Agostino Beazzano is not shown; but the 1506 Uffizi self-portrait is a nice compensation. The real loss is a direct victim of the invasion of Ukraine: the Russian Federation withdrew permission for another Tuscan photo, Holy Family with beardless Josephto be sent from Vladimir Putin’s hometown.

Raphael appears as a universal artist, as Giorgio Vasari called him: “universal” in the sense that he explored and succeeded in all the media known to his time. Whether designing buildings, painting frescoes, altarpieces, portraits, table settings or tapestries, he led. Truly, then, a Renaissance man with universal appeal. 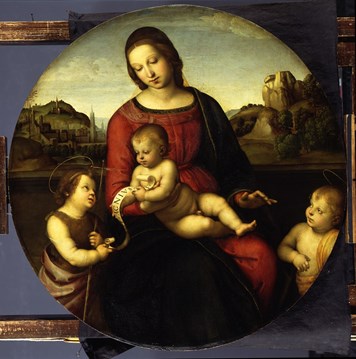 But, if we take a closer look at his work, we see, perhaps surprisingly, how often he paints without shadows, both literally and metaphorically. The figures stand in landscapes or, as in the case of A knight’s vision (NG), lying on the ground, in broad daylight, but without casting shadows.

As a result, many figures seem weightless, suspended in imagination. As beautiful as they are, are they also perhaps painted without their shady side? Could they be angry, mischievous, or downright evil, or are they simply representations of virtue and beauty?

Only in his portraits does Raphael indicate a degree of psychological understanding that we can recognize. Louvre portraits of the diplomat Baldassare Castiglione, whether from 1512-13 or the last image mentioned as being worked on in 1519, and a double portrait that includes his own self-portrait with Giulio Romano blaze with insight. A final room of friends and patrons is an exhibition in itself.

The Cunning Nervousness of Pope Della Rovere (1511) – occasioned, perhaps, by an ill-judged intrusive modern reproduction of one of Raphael’s frescoes alongside – the assurance of fellow artist Valerio Belli, and the extraordinary Moustached Christ in the Descent into Limbo (1511-12) reveal a human interest.

It is perhaps as a draftsman that he triumphs overall. The many sketches on display show very clearly the meticulous way in which he sought to assert his presence.

In the highly accomplished pen and ink drawing of the Annunciation (Stockholm), the Archangel and Mary are monumental figures in what may well be a church setting. If it is as old as suggested (1504/05), it is a remarkable achievement, as there does not appear to be any resulting altarpiece; was it an idea for a sculptural group? 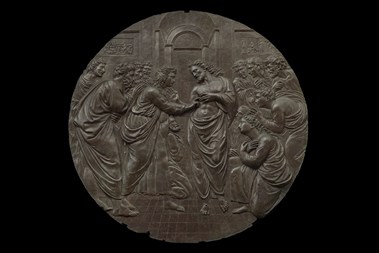 From the same type of date comes the sketch of “Leda and the Swan” after Leonardo (SM The Queen) which, Claudio Calí has ​​recently determined from a study of his watermark, is drawn on the same paper Tuscan that Leonardo used in Florence. Whether Leonardo ever completed a painting on the same subject is debatable, but the figure of Leda itself resembles the sculpture.

A rather similar monumentality characterizes the forms of the sketch for The Slaughter of the Innocentsanother work from the Royal Collection resulting from the King’s purchase of Consul Smith’s collection in 1762. It was widely distributed in an engraving by Marcantonio Raimondi (vs.1480-pre-1534).

I first became aware of Adam Lowe’s work for the Factum Foundation, with his use of digital technology to make exact reproductions of artwork, at Walpole’s home in Strawberry Hill. In Bishop Auckland, the top floor of the Spanish Gallery (Arts, April 14) recreates Cardinal Tavera’s burial chest, damaged by bombs during the Civil War, El Greco’s Risen Christ in his tabernacle and paintings by Valdés Leal. There, the declared purpose is educational.

Here, next to one of the tapestries of Leo X from the Sistine Chapel (St Paul preaching in Athens), is a high-resolution 3D facsimile of one of the V&A cartoons (Arts, March 12, 2021). With all the originals on display, I wondered why the National Gallery was giving a platform to Factum. Raphaël does not need such questionable support.