IN MAY 1520, the 20-year-old King Charles I of Spain, newly elected Holy Roman Emperor, joined his aunt and uncle, Catherine of Aragon and Henry VIII, on a pilgrimage to Canterbury (Arts, June 11, 2021).

What none of the English sovereigns could have known was that their four-year-old daughter, Mary Tudor, would become the wife of Charles’ son Philip (b. 1527), later King of England by virtue of this marriage (1554).

After his progress through Kent, Charles returned to the Netherlands and made a triumphal entry into Antwerp in September 1520 en route to his coronation at Aachen on 23 October, under the gaze of the artist Albrecht Dürer.

The 500th anniversary of the coronation resulted in an exhibition in Aachen which also celebrated the retirement of Dr Peter van den Brink as director, and, following this, the National Gallery expanded current exposure; both were postponed slightly for too obvious reasons.

The exhibition follows Dürer’s long journeys, not just to the imperial court, in a shameless attempt to ensure that his pension, suspended at the death of former Emperor Maximilian (January 1519), is restored, but includes his first trips to Italy.

Albrecht Dürer was born in 1571 and had established his own business as a journeyman painter and engraver in the 1490s after initially training as a goldsmith in his father’s workshop. Susan Foister has collected nearly seven dozen of his works in the National Gallery, along with altarpieces, paintings, sketches, watercolors and his own letters.

Travel in the early modern period was about as uncertain as it is today. Passports to cross Europe to the Netherlands had to be obtained in Bamberg and shipwrecks avoided. Plague was rampant, and at some point Dürer caught malaria. In his journal, he may look like a Latter-day Saint Paul. The show could be subtitled “Works of a Renaissance artist”.

In 1490 he left Nuremberg for Colmar and probably continued to Mainz, Basel and Strasbourg, returning in 1494 for his marriage, necessary to allow him to open a workshop. A few weeks after his marriage, he had left Agnes Frye, the daughter of a long-suffering brass worker, to travel. They never had children.

He crossed the Alps, visiting the Habsburg towns of Innsbruck and Trento, a town in Upper Adige which he captured in one of his momentary watercolors (Trintperg — Dosso di Trento, Kunsthalle, Bremen). It stands silent and calm under a single mountain in an intentionally barren landscape. Fifty years later, Charles V chose the city as the meeting place for the Ecumenical Council, its harmony disturbed by the onslaught of the forces of Lutheranism.

Whether he then went to the Republic of Venice is disputed. His more documented visit was ten years later, from late summer 1505 to February 1507, when he went there, perhaps to escape the plague or his wife.

Or he may have gone to accept an invitation from Jacopo de’ Barbari, a Venetian artist who had lived in Nuremberg for at least a year from 1500 as court painter to the future Emperor Maximilian. 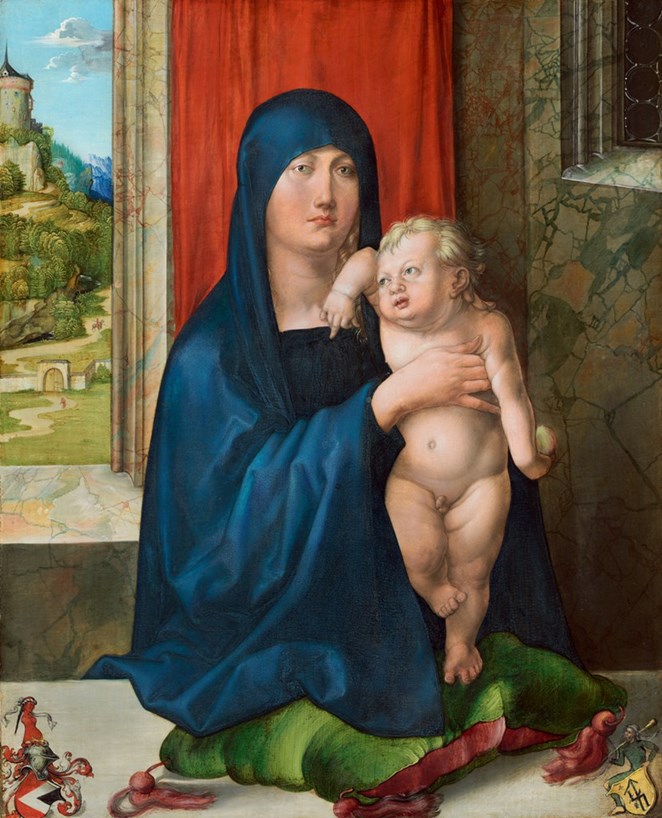 For the church of the German Hanseatic merchants of San Bartolomeo a Rialto, he painted an altarpiece, The Madonna of the Rosarywith all the color and light of the Serenissima to fend off local criticism that he could only master woodcuts and black and white engravings.

It had first been commissioned before leaving Germany by banker Jakob Fugger, acting as an intermediary between the Emperor and Pope Julius II. The original (now in Prague) was badly damaged, but we can see a copy, painted shortly after Emperor Rudolf II acquired the original in 1606 for Strahov Monastery (Kunsthistorisches Museum, Vienna).

In this document, Dürer has reused a sacred talk, to celebrate the friendship between the Papacy and the Empire; with Saint Dominic behind her, the Virgin is enthroned between the kneeling figures of Pope Julius II and the Emperor, who have both laid their earthly crowns on the ground while the Child Jesus crowns the bald pontiff and the Virgin places a garland of roses on the emperor’s head.

Frederick III remained emperor until his death in 1508, but Dürer gave him the features of his successor Maximilian, who was crowned in Rome. In addition to the central figures, Dürer peppered the scene with portraits, including Burkhard von Speyer, whose remarkable portrait (SM The Queen) is on the wall nearby, and a very conniving self-portrait with a scroll indicating that the altarpiece had taken him five months to paint. From his journal entries we see how prolific he was as a portrait painter, while from his letters we learn how widely prized his portraits were.

In one, dated February 7, 1506, he condemns many Italian painters he met for outright plagiarism; “many of them are my enemies and copy my work in the churches and wherever they can find it; afterwards they criticize it and claim that it is not made in the antique way and say that it is not good. 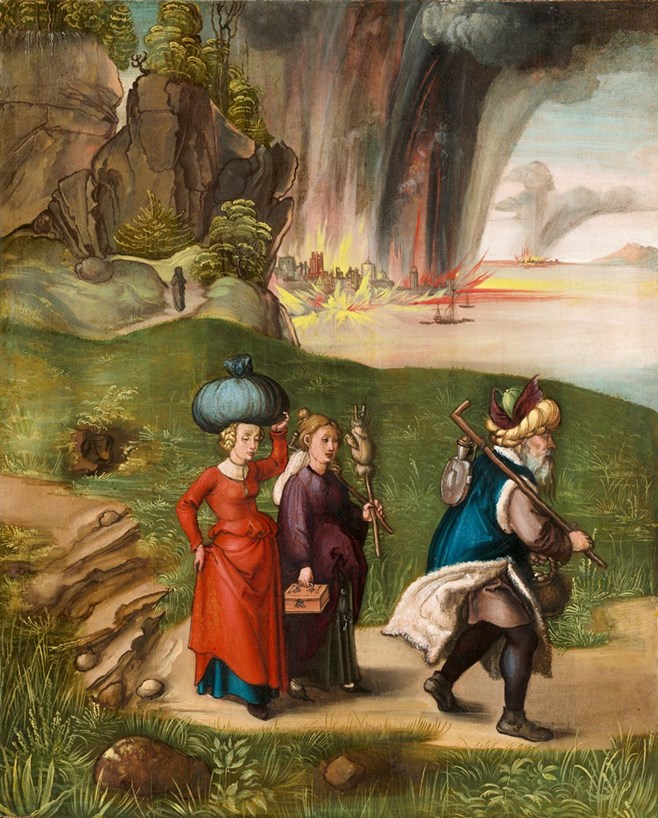 Giovanni Bellini singled him out for his praise, and it was perhaps this reciprocal friendship that caused local resentment. Unless it’s just the German braggart finding a grievance, few of his altarpieces have been found. His influence on early 16th-century Venetian art was perhaps not as profound as he claimed or as marked as that of the Bellini family.

In addition to Rosenkrantzfestthe Christ among the doctors (formerly in the Barberini Collection, Rome; now Museo Nacional Thyssen-Bornemisza, Madrid) is the other altarpiece on display. This extraordinary composition revolves around the fulcrum of four whirling hands, those of the adolescent Christ and the gnarled hands of one of the masters of the Law. Despite all their learning from the book, it is Christ who has the Word of Eternal Life.

This is a remarkable exhibition by a remarkable man, perhaps the first artist to tour Europe and almost certainly the first to observe daily life with such precision and thoroughness. Whether it is a tawny lion, a crouching dog, the face of an African slave, an altarpiece or a formal portrait, Dürer’s work remains immediately recognizable and remains important for Western art history. How he must have appreciated the fact that his monogram of his initials with a date gave Anno Domini a record.

His death in 1528 will no doubt occasion much larger exhibitions than can now be assembled in the National Gallery, but for this relief, thank you very much.

“Dürer’s Travels: Travels of a Renaissance Artist’ is at the National Gallery, Trafalgar Square, London WC2, until 27 February. Telephone 020 7747 2885. www.nationalgallery.org.uk